From UtaMacross Wiki
Jump to navigation Jump to search

After selecting a song and difficulty, a list of center divas from other players is given. Every center diva shown will also have its main episode plate equipped. Players should choose their assists carefully as the stats and center skill of the assisting diva's episode plate will also contribute to the overall strength of the player's team. Players can also utilize the refresh button to generate a new list of assisting divas should the current list provide a lackluster list of assistants to pick from. Players on the list who are also friends will have mercat icons next to their episode plates.

After selecting an assisting diva, the player will be taken to the last part of the preparation screen. This screen is exactly the same as the unit formation menu, and it gives players the same functionality without having to cancel their current song selection.

Players may choose to activate the super dimensional prism in the same screen where they can make changes to their unit formation as shown below:
500px
Players will be taken to another screen where they can configure the super dimensional prism. Here players can choose the diva and Valkyrie that will be performing in the place of those set on their current team. Players also have the liberty of choosing the outfit the performing diva will wear. This way, players have full control over the quality of the live performance without having to make sacrifices to their team formation to accommodate them. This also solves the issue for players who may feel uncomfortable playing a song without using the original performing character(s).

The last option before a live show starts is to decide how fast the notes enter the tapping areas. The default speeds for difficulties are: 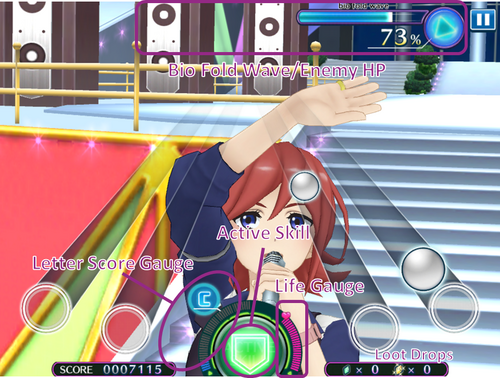 The layout of the live performance includes: 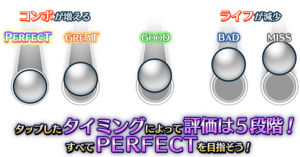 Criteria on how the game judges the timing of the player's notes.

Uta Macross utilize rhythm game mechanics that are very similar to other rhythm games on smartphone and tablet systems. Circular notes will drop from the top in accordance to the beat, instrumentals, or vocals of the song and players must time the proper inputs depending on the note type on the area the note will eventually drop down to. In the moment of panic and frenzy and the player touches outside of the expected input zone, the input can still be accepted so long the location of the input reasonably close to the area. The primary, but minimal goal is to complete the song without running out of life. As players improve, the game becomes more centered around consistent performance and properly timing inputs as they will inevitably lead to higher scores and better rewards.

There are 4 main types of notes that may appear in a live performance:

Notes may also have symbols embedded inside them and certain episode plates and effects can increase the number of appearances of these special notes:

Skills may trigger during the course of the live. The skills that can trigger differ depending on what episode plates are equipped to the performing divas. Skills that trigger during lives are either categorized as active or live. Active skills are triggered manually by the player by tapping on the active skill button. Once the active skill is triggered, the note areas will typically change from empty space to the active skill icon. Active skills provide a great boost, but can only be activated once during the entire performance. The current active skill is determined by the main episode plate equipped onto the center diva. Live skills are similar in terms of effect, but are weaker, last much shorter than active skills, and activate at specific timings given by their descriptions. Live skills are provided by all the other episode plates that is not the main plate on the center diva, so long as the conditions allow for them to occur. Multiple skills can be activated at the same time, and this will be reflected by the alternating skill icons in the tapping zone. Active and live skills can be summarized into the following categories: 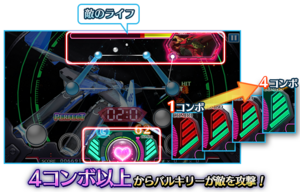 Visual guide on Valkyrie Mode by the official JP wiki.

While playing the song for a while and with a current Bio Fold Wave gauge of 100% or more, the game changes the perspective from the performing diva to the sortied fighter. In this mode, players must defeat the stage boss by damaging it with notes before the timer runs out. However, in order to deal damage to the boss, players must first charge up the counter that appears beside the center interface. After charging up the counter with a 4 note combo, successive well timed notes will begin to damage the boss. PERFECT notes have a chance of dealing a critical hit, and attack notes will also deal guaranteed critical hits. Should the player break their combo while the counter is fully charged, the counter resets and the player must quickly regain the charges in order to continue damaging the boss. Players must defeat the boss within the allotted time period given in the song. Should the player fail to do so, the enemy will retreat, the game will display a TARGET LOST notification, and the fighter pilot will mention something regarding not being able to finish off the target. The game will then transition back to normal mode for the rest of the performance. Having high support stats on the player's divas and episode plates along with a strong fighter will help increase the damage done to the boss. The support stat will not only boost the fighter's damage, but it will also increase its critical hit rate.

Should the player successfully engage and defeat the boss, the border area of the screen changes to a light blue color, the diva gives an audio cue that Diva Mode has been activated, and the game will transition to Diva Mode. In this phase, the player is usually treated to a rewarding phase of increased loot drops and bonus score notes as they are treated to background animation if the option is enabled and finish the rest of the song.

Super Diva Mode is similar to Diva Mode in that it activates after an enemy has been dispatched by the player. However, Super Diva Mode only activates if the player can take out the enemy at a much quicker rate. Like the transition to Diva Mode, an audio cue from the diva will state that Super Diva Mode has been activated, but the border area of the screen will change to a rainbow colored background instead of light blue. The increased loot and bonus scoring opportunities is double that of Diva Mode, and players should always strive to reach this phase of the song. 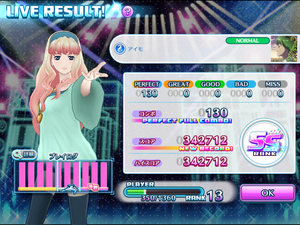 After the completion of a successful live performance, the player will be taken to the results screen. Here they are given their score, score rank, and the number of notes the player achieved in each timing category. Players can also see their progression towards the next player rank and the play log graph.

The in-depth play log can be accessed by tapping on the magnifying glass nearby the play log graph. The play log analysis screen provides a graphical display of the player's performance over time and also makes special note of mode transitions if they occurred. Each bar in the play log graph represents a player's performance within the 10 second interval of time elapsed during the live performance. Tapping on the bar will show even more information such as how many note types were achieved or what skills were activated during the 10 second interval bar that was selected. The bars can display multiple colors based on the judgement received on the player's notes:

The player can also press the dual-arrow button on the top right corner of the play log analysis screen to change the bar sizes of the play log graph to reflect note distribution by interval instead of the default option of full sized bars for every interval.

The second part of the results screen will display the proficiency points gained and any progress towards the song's proficiency level for the performing divas. The current experience and levels for all divas are also displayed and show animated progress should the diva gain a proficiency level. The last screen shows all acquired loot from playing the song and item notes successfully confirmed. Depending on the score rank the player has earned on the song, there will be a bonus multiplier on the loot gained. After applying the multiplier, the total loot is then rounded to the nearest whole number. The bonuses for obtaining certain score ranks are shown below.

The base maximum item drops for each difficulty are as follows.

These can be further increased using certain plates with the item icon. Rare loot acquired will also be shown in the last screen with golden borders. However, unlike regular loot and items, score ranking multipliers have no effect on the quantity of rare loot obtained. Only the luck stat plays a role in determining the quantity and quality of rare loot.