From UtaMacross Wiki
Jump to navigation Jump to search

Events are special game modes and features that are available for a limited time. There are plenty of incentives to play them as they offer event exclusive episode plates, upgrading materials, and titles that cannot be obtained in regular game play. There are many types of events and their names are derived from similar events in other mobile rhythm games since Uta Macross has yet to give any sort of categorization to any events with the exception of the Miss Macross Contests.

Play the featured song in the event tab within a 2 day period and compete to have the highest score ranking for that song. 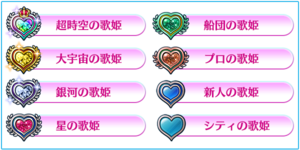 Ranking Titles that can be obtained

The rules for Miss Macross Events are straightforward.

The titles that can be earned based on the score ranking are shown below. Since the Miss Macross Contest is a reoccurring event, it is possible to earn the same title multiple times. +(#) will be displayed next to the title will show that how many times the player has received the title.

Players must acquire special event tickets to play the event song and gain event points during the duration of the event. Players will be rewarded with materials and event specific prizes

Mission events gives players a random song from the event song pool and a random challenge to complete with the selected song. Players must complete the missions and acquire event points for materials and event specific prizes.

Event point acquisition is broken down into 4 parts: base points based on difficulty, mission bonus, event song bonus, and event plate bonuses. The 4 parts combine together to give the formula of:
Event Points = Base Value * (1 + Mission % Bonus) * (1 + Song % Bonus) * (1 + Event Plate % Bonus)
Assume that percentages are already converted to decimal values

The base amount of points based off of difficulty is given below:

Play an event song that is marked as a bonus will give the player an additional 10% bonus to their event points gained.

Battle events, as implied by the name, is an event where players battle against other players. The game play and object is very straight forward. Upon starting or logging into the event, players are matched up against 3 players of varying strengths and songs. The player must pick an opponent and outscore them. Players will earn event points based on whether they win/lose, how high they scored, what difficulty the song was played in, and other factors.

Event point acquisition is broken down into 4 parts: win/loss based on difficulty, player score, win streak bonuses, and event plate bonuses. The 4 parts combine together to give the formula of:
Event Points = [(Win/Loss-Difficulty Base Value) + (Score Bonus)] * (Win Streak Bonus) * (Event Plate Bonus)

The player will earn a base amount of event points based on what difficulty they chose to play, the difficulty rank of the rival chosen, and whether they won or lost their match. The values determining the win/loss base event points is shown in the table below. Players will also gain the same amount of points from losing regardless of the rank of the rival. Green values are for victories while red values are values are the amount acquired after being defeated.

Players can earn a bonus multiplier for consecutive wins up to a maximum of a 10 win Deculture win streak. The win streak multipliers are given in the table below.

Diva Events is a new event type introduced with the event "LIGHT THE SUMMER" on the 24th of July, 2020, which taking at the same time period as the Battle Event. The objective is to raise the status of divas by gaining "Yell" through clearing a song.

The amount of Yell gained is also the Event Point gained.

Event point acquisition is broken down into 3 parts: base value, score bonus, and episode bonus. The 3 parts combine together to give the formula of:
[(base value) + (score bonus)] * episode bonus

The base value of Elemental Yell is based on the song difficulty.

For more information on the current rotation of daily event songs, click here.

Daily songs are songs that are reoccurring and change every day at midnight JST. While they feature the same songs as regular lives, their rewards are completely different and are completely focused on gathering specific target material. These materials are used for leveling up episode plates. However, these songs can only be played 3 times each day regardless of difficulty. Songs will change at the end of each month so be sure to earn all the score, combo, and clear achievement rewards before then!